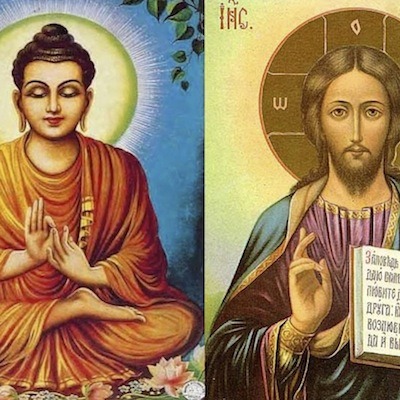 The story goes that the young Jesus who had fled to Egypt to escape Herod took a job with a caravan on the ancient Silk Road which led from China to Egypt to India. We all think of Jesus as a carpenter but what the Christian Gospels call him in Greek is “τεκτων” in our alphabet “tekton” meaning hand worker. He would have been useful addition to any expedition. He may have picked up some ideas on the journey.

When Jesus tells a man to “give away all you have to the poor and follow me” he is not suggesting that everyone do this. Society would collapse. He was making a point. A point about giving up our attachment to material things. When he says “Consider the lilies how they grow: they toil not, they spin not; and yet I say unto you, that Solomon in all his glory was not arrayed like one of these” he was talking about living in the now rather than fretting over an imagined future.

All of his words about compassion, charity, forgiveness, kindness and love are almost identical to the teachings of Siddhartha Gautama. No other Middle Eastern religion of the time talked about these things. Religion in that area of the world at that time was concerned with appeasing God so he did not punish you. It was about priests, ritual and sacrifice. Then along comes Jesus talking about love. It must have been like a breath of fresh air to those oppressed people.